In a world that pushes for short statements on complex matters, it is very easy to get carried away and give in to the pressure. Thus, my post earlier today may have hurt some people’s feelings whose interpretation of what the point I was trying to make may have been different from what I intended to say. On the other hand, the feelings underlying the post seemed to resonate with many, so I have taken some time to write my thoughts out in greater detail, in the hope that it will convey the point that I was trying to make without upsetting anyone.

An Underlying Cause – Reflections on the Killings of November 13th 2015

With the setting of the sun on November 13th 2015, Bahá’ís around the world celebrated, for the first time in synchrony on a global scale, the Birth of Bahá’u’lláh, the Founder of the Bahá’í Faith. Since the spreading of the Faith of Bahá’u’lláh to the West, Bahá’ís have been celebrating their Holy Days according to differing calendars in the East and the West, however, this year for the first time in history, they were united in a “common implementation of the Badí calendar”.

Bahá’ís are united in pursuing a far greater number of goals than merely celebrating Holy Days on the same day worldwide. After all, the main purpose of the Bahá’í Faith is “to carry forward an ever-advancing civilization”. In a Tablet to Queen Victoria, Bahá’u’lláh wrote:

“That which the Lord hath ordained as the sovereign remedy and mightiest instrument for the healing of all the world is the union of all its peoples in one universal Cause, one common Faith.”

Bahá’ís, the followers of Bahá’u’lláh worldwide, have been trying for close to two centuries to translate His Teachings into actions in their daily lives.

The Universal House of Justice, the Supreme Body of Bahá’ís worldwide, has stated that “World peace is not only possible but inevitable.” A perfect example of this is provided by Bahá’ís from around the world gathering to elect this Supreme Governing Body, at the International Bahá’í Conventions, every five years, in a spirit of friendliness and fellowship: 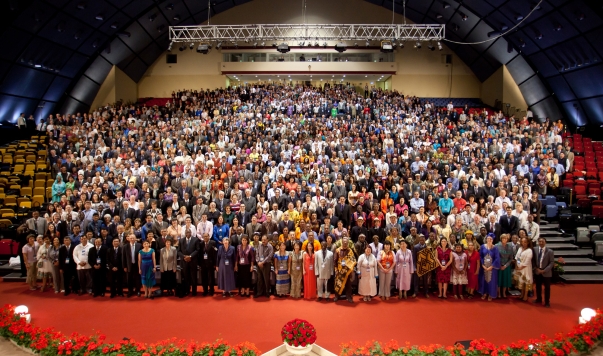 If these Bahá’ís are able to do it – why can’t we all? Why can’t we all set aside our ignorance-based prejudices, and embrace each other with love and tolerance? Because surely, we will not be able to achieve peace unless we do so.

“The well-being of mankind, its peace and security, are unattainable unless and until its unity is firmly established.”

Many of us in the Western world will have shared our feelings of solidarity with those who were affected by the shootings in Paris. My heartfelt condolences go out to those affected by the shootings in Paris, either directly or indirectly. I also feel that is important on such occasions to remind ourselves that this was not an isolated incident, but rather a symptom of an underlying cause affecting the entire world, namely the widespread nature of disunity and injustice in many aspects of our lives. Indeed, on the same evening suicide bombings were carried out in Iraq and in Lebanon the night before. We are also well aware of the many mass shootings or single gun incidents that take place in the United States of America and elsewhere so frequently; the abuse that many suffer in their own homes from family members; the countless incidents of rape that plague the world (be these carried out by strangers or close friends); the ongoing reports of expressions of racial prejudice in some of the so-called global ‘centres of excellence’; and many other cases of a similar nature. All of the above beg the questions:

“How long will humanity persist in its waywardness? How long will injustice continue? How long is chaos and confusion to reign amongst men? How long will discord agitate the face of society? The winds of despair are, alas, blowing from every direction, and the strife that divides and afflicts the human race is daily increasing. The signs of impending convulsions and chaos can now be discerned, inasmuch as the prevailing order appears to be lamentably defective.”

The shootings in Paris, suicide bombings in Beirut and Baghdad, and many more negative incidents that occurred worldwide yesterday (and many more that occur on a daily basis), can thus all be seen as signs of a lamentably defective world. It is evident that the vast majority of the world’s population would like to bring an end to human-induced suffering. For many, the truth stated by Bahá’u’lláh a century and a half ago is starting to resonate:

“Regard the world as the human body…”

If we take a moment to reflect on this statement, we can start to see parallels between the interactions of the different parts of the body and the various peoples of the world. A disease affecting one part of the body, will necessarily have its impact on the well-being of the body as a whole and, whether directly or indirectly, all the other organs of the body will suffer as a consequence.

A good physician will always do their best to diagnose the correct disease, i.e. the underlying cause to the symptoms that their patient is experiencing. Similarly, if we want to bring an end to the injustices across the world, we need to dig deeper than the feelings stirred by some atrocity or other that we encounter. Realizing and accepting the fact that there is one underlying cause to the world’s symptoms, will enable us to walk on the right path leading to a solution.

The essential equality of all human beings has as a corollary the fact that all life is equally precious. I thus invite you to take a few moments to reflect on the contribution that each one of us makes on such occasions to the discussion of such topics – be it on social media, or in our discussions with friends. Should we not be equally upset by reports of attacks, shootings, bombings, and abductions regardless of the latitude and longitude at which they take place? How do we ensure that we express this fairness in such conversations? Is clicking that “Change your profile picture” button really the best expression of solidarity for the multitude of atrocities carried out worldwide on a daily basis? Or are we, by singling out that one country that is closer to home, forgetting about the countless masses of people elsewhere in the planet who have suffered just the same, if not a more degrading fate? Should we tolerate the selective and biased reporting by the media, and, more importantly, should we enhance this effect through what we post on social media?

On this note, the following words of Bahá’u’lláh seem to strike the right chords:

“Let your vision be world embracing, rather than confined to your own self.”

To build this vision we must start at the grassroots, and ensure that the education that we impart to the next generation is not merely material, but also human and spiritual. This theme is one that is common to the thoughts expressed by many of the world’s great thinkers. ‘Abdu’l-Bahá stated:

“Every child is potentially the light of the world—and at the same time its darkness; wherefore must the question of education be accounted as of primary importance.”

Similarly, Nelson Mandela pointed out that:

“Education is the most powerful weapon which you can use to change the world.”

And it is inevitable that negative thoughts will reach our minds, whether born of prejudice or of retaliatory feelings. What is important is how we deal with these thoughts and feelings.

“When a thought of war comes, oppose it by a stronger thought of peace. A thought of hatred must be destroyed by a more powerful thought of love.”

And to finish on a more positive note, let’s call to mind the following words:

Come and cast down your weapons of wrath, till unity is won! Come and in the Lord’s true path each one help each one.” – ‘Abdu’l-Bahá

NB: If you are interested in contributing actively towards an educational system at the heart of which lies the recognition of the spiritual nature of mankind and whose methodology centres around nurturing the positive in every one of us and helps us fulfill our capacities in service to our fellow human beings, you may wish to take a look at the Ruhi Institute’s work. 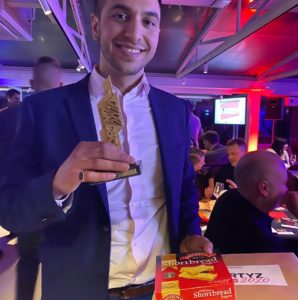 Na’ím Anís Paymán is a Bahá'í of German and Iranian descent who grew up in Albania and later moved to the UK to pursue his studies. Paymán  is a serial entrepreneur seeking to bring meaningful innovation to the world. While taking Natural Sciences at Gonville & Caius College at the University of Cambridge, he set up Peymans, a provider of short-term accommodation in Cambridge and Oxford. After graduating, he oversaw the growth of the company to a number of cities across the UK. To support the ongoing growth while retaining a high standard of service, he felt it necessary to adopt state-of-the-art software. After extensive research, Peymans were unable to find a software provider that met their real-world needs as multi-location serviced apartment providers, so Na’ím decided to start developing software by serviced apartment providers, for serviced apartment providers. Besides wanting to have a powerful Property Management System and Channel Manager, he also felt it important to create a piece of kit that enabled everyone to grow their direct bookings. Hence, Zeevou was born. Zeevou has won the Most Innovative New Hospitality Technology award at the Innovation & Excellence Awards 2020 and has been shortlisted for the Best Channel Manager award at Shortyz 2020.